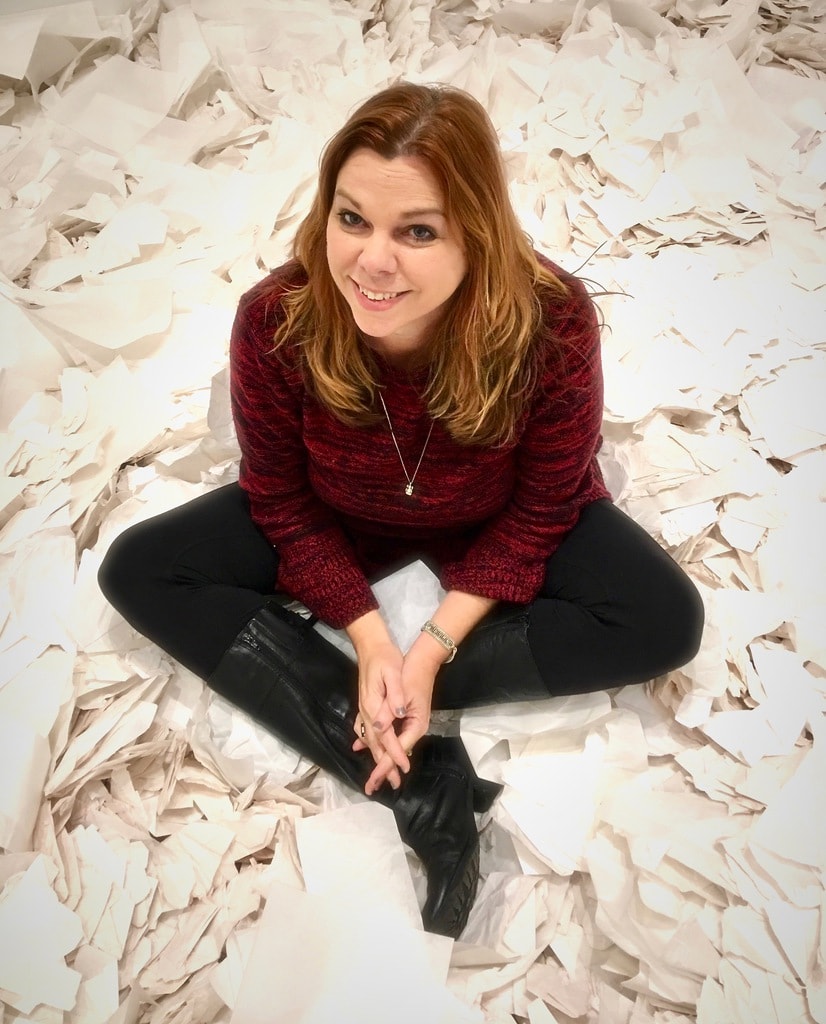 Because there always is one.

This pic was taken by my boyfriend Jeff. It looks planned out and perfect for a writer, right? Surrounded by paper, and smiling. It came from an impromptu moment in the winer of 2018. My father was sick, and I had just moved back to Annapolis full-time, to help my mom take care of him. It was a dark time, figuratively and literally–who moves from Florida in the dead of January?

Jeff wanted to cheer me up, so we drove to DC to get what he swore were the best dumplings on the East Coast, because he knows I think dumplings are a perfect food. But the dumpling place had closed shop, replaced by something forgettable, so we got back in the car and ended up at The Hirschorn. Jeff is an artist and it’s one of his favorite places. I hadn’t been there in years, but looking at art always makes me happy, and if that wasn’t possible due to the current situation, at least it would be a good distraction from the worries at hand.

We wandered into the installation Ann Hamilton: At Hand. It was a simple white room, with single pieces of paper fluttering down from the ceiling at regular intervals. I had never heard of the installation, which originated in a Chelsea gallery in 2001. But I was transfixed. The room was a playpen of sorts; you could kick at the piles of paper, sit in it, roll in it. The machines overhead dropping the paper made a soothing click as they released each blank piece, which would then slowly float down, back and forth on invisible air currents, as it descended to meet the other pages on the ground.

We were initially quiet, whispering as you do in museums, but I heard gasps and then giggles as new people entered the exhibit, faces aglow as they realized they could play in the pages. Two toddlers got into a paper fight, tossing the pages like fluttering snow. One woman laid down in a corner and closed her eyes. The security guard stood sentry by the door, grinning as he watched our collective joy take over the quiet space, our hushed whispers punctuated by the rhythmic tick overhead as the machine released another blank page for its journey to the floor. I sat down and ran my hands through the piles, burying my feet like it was sand and I was a kid at the beach. Jeff said “Quick, look at me,” and took my photo with his phone.

We stayed there for 20 minutes, which is an eternity in a museum, when you’re trying to see everything and closing time is fast approaching. The day was cold and dreary, my father was dying and my world was in flux. But I was momentarily relieved and happy, immersed in piles of blank paper, more dropping down each minute.

Ann said part of her inspiration in creating the installation was thinking about “connecting breath to paper, not through the mediation of writing.” That’s what I think of when I see this photo. And how joy can be found in the most trying of circumstances, passed on through a piece of paper.